IMMUNE BOOST YOUR SYSTEM with CYTOKINEs

The term "cytokine" is derived from a combination of two Greek words - "cyto" meaning cell and "kinos" meaning movement. Cytokines are cell signalling molecules that aid cell to cell communication in immune responses and stimulate the movement of cells towards sites of inflammation, infection and trauma. 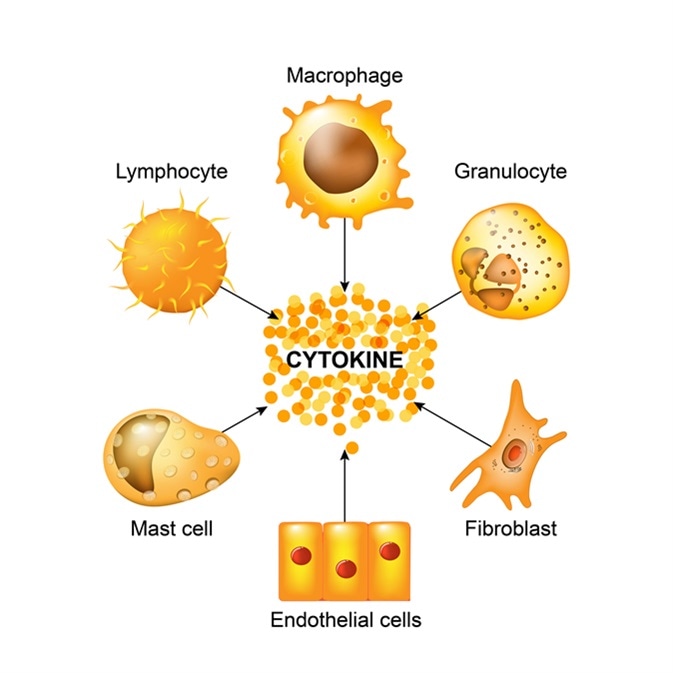 They are released mainly to stimulate an immune response when the cells detect any  foreign substances in the blood.
Cytokines essentially consists of proteins, peptides, and glycoproteins. They are primarily released by immune system cells in order to initiate cell-to-cell interaction in order to generate an immune response.  For instance when white cells come into contact with pathogens(bacteria, viruses) they immediately release cytokines, which in turn communicate and activate other white blood cells to attavk the foreign invader. 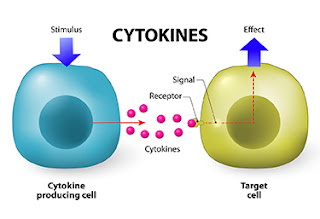 This is the natural way our immune response of alerting and recruiting more numbers of White Blood Cells (WBC) to combat the infection ie via these chemical messengers (cytokines).
In fact, cytokines are crucial in regulating the function of the immune system. Cytokines work in a similar manner in response to an injury or wound. In such circumstances, cytokines signal to increase the population of WBCs at the injured site to speed up healing.

Cytokines are also mediators of inflammatory response that occurs after a living tissue is damamged. Inflammationcasuyed by cytokines is a defence mechanism, which helps to keep the injury localized.

When cytokines are released from a cell, they attach to the receptors located on the outer cell membrane of target cells. This binding action triggers a chemical signal that is sent to the receptor cell, inducing it to perform a given activity. For instance, when a cell comes in contact with bacteria, it signals other cells of imminent infection so that immune system can work to combat the infection.

In our practice we give Cytokines for skin Rejuvenation especially for aging skin as well as intravenously to boost the immune system. It can be taken regularly or as a one of.
Watch this video to understand better.

Popular posts from this blog

September 30, 2011
Many Asian women experience a darkening of the inner thigh skin or the perineum skin as they age and especially after pregnancy. This is a very common phenomenon and can be quite unbecoming especially in a swimsuit or bikini. Sometime this darkening is due to the rubbing of inner thigh skin together due to excess fat in the thighs or a fungal infection which causes itchiness and scratching. Our new laser can now treat this area of skin. Each treatment can improve the condition by at least 20%. Because of this I usually recommend 3 sessions with each session 1 month apart. Although I must say that some women have found satisfactory outcome even after just 1 treatment.
7 comments
Read more

March 10, 2011
Finally found a quick fix to a long term problem! This method not only can reduce the excess weight fast and permanently, it does this by burning the reserved stubborn fat in the body and not the structural fat which easily returns with a vengeance once a program is over. In summary, this "Enhanced" Weight Loss Program aims to : 1. Loose excess weight esp from stubborn fats 2. Increase and Reset Basal Metabolic Rate to a higher level and by doing the #1 and #2, able to 3. Maintain the weight loss forever! ( don't we all wish for this?) . With all this in mind, I decided to embark on this program myself. It is Day 8 today. This protocol should reduce my weight from 0.5 to 1.0lb per day. I only need to follow a special diet plan and take the medication daily. Total loss expected if all progresses accordingly will be 6 to 9kg (or upto 15lbs). I started with 64.8kg on Day1, went up to 64.9kg on Day2 and have progressively lost between 0.3 to 0.7kg daily since. Today I am at
84 comments
Read more

Dr.Sutina
My believe everyone has a right to be well informed in whatever they choose to do . I want to educate adn empower as many as possible so they make the right choices for themselves. Stay safe.